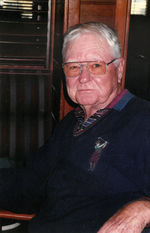 Hal Townsend Betty, born July 9, 1929 in Denver, Colorado, earned his wings on April 6th, 2022. He is preceded in death by his father, Charles Betty, mother, Emilu Betty, and sister MaryLou Burdett. Hal is survived by his loving wife of 70 years, Jerry Betty, his children Leslie (and Tad) Benda, and Greg (and Rita) Betty, and niece and nephew, Emily Nutt and Jeffrey Burdett. He is also survived by 6 grandchildren, Krystal (and Jason) Boyle, Clayton (and Casey) Berryman, Sean Betty, Ryan Betty, Kevin (and Chandler) Benda, and Alexis Benda, as well as 6 great grandchildren, Brody, Collin, Matthew, and Emily Boyle, Hudson Berryman, and Blake Benda.
Hal grew up in the small town of Jal, New Mexico. He graduated from Jal High School in 1947, and attended College at Highland University for 2 years. After completing his sophomore year of college, Hal began his career with El Paso Natural Gas Company. He then joined the Air Force in 1950 during the Korean Conflict, and later married his High School sweetheart, Jerry Betty, on September 15th, 1951 while stationed at Sampson Air Force Base in New York. He spent a year and a half at FEAF Headquarters in Tokyo, Japan. In 1954, he returned to Jal, New Mexico, and resumed his career of 38 years as a Measurement Supervisor at El Paso Natural Gas Company. He eventually obtained his degree in Business from College of the Southwest in Hobbs, New Mexico. They were blessed with their daughter, Leslie, in 1957, and their son Greg, in 1959.
Hal and Jerry lived in Jal, NM until 1992, when they retired to Ruidoso, NM. They became members at Cree Meadows Country Club, and loved their extended “Cree Family.” They loved their little mountain church, First Presbyterian Church of Ruidoso. Due to health issues, they moved to Las Cruces, NM in 2015 to be near their daughter.
Hal loved Jesus, cherished his family and enjoyed studying the Bible. He also enjoyed playing golf with his friends, singing in the choir at his church, and spent lots of time with other family members searching for “Betty Prairie.” He loved collecting coins, shining pennies with rocks, telling stories, and sitting in his recliner watching Fox Business. His grandkids fought over who could lie in his lap and get one of his famous back rubs. He loved Dr. Rama, his Oncologist, and all of the nurses at Memorial Cancer Center. He adored his caregiver, Rachael Bizzel and all of the Tender Care nurses that helped care for him toward the end. Most of all, he was grateful for his wife, who he referred to as his “girlfriend”, his children, and for the love and support of all of his grandkids who adoringly called him Papaw. He was a stranger to no one.
Family and friends will always remember “Hal from Jal” for his gentle, loving soul, for his faithfulness, and for his ability to always see the good in others. He was truly a great man, and a blessing to all who knew him.
A celebration of life will be held for Hal on Friday, April 15, 2022 at 11:00am at First Presbyterian Church of Ruidoso. In lieu of flowers, the family requests donations be made to Mesilla Valley Hospice and/or First Presbyterian Church of Ruidoso, NM.
Funeral Service has been postponed for a later date.

To send flowers to the family or plant a tree in memory of Hal Townsend Betty, please visit our Heartfelt Sympathies Store.