In Memory of
Elvira
Trujillo
1921 - 2022
Click above to light a memorial candle.
Memorial Candle Tribute From
Getz Funeral Home
"We are honored to provide this Book of Memories to the family."
View full message >>>
Send Flowers
Menu 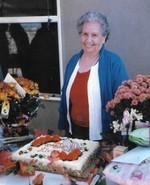 She was born on October 10, 1921, in Las Placitas, New Mexico to Brigido Montano and Melesia Herrera Montano. She married Gorgonio L. Trujillo in Las Placitas on January 17th, 1948. After marriage they moved to Fort Bayard, New Mexico where Gorgonio worked at the Veteran's Hospital and their first three children were born. They later moved to Las Cruces where their fourth child was born and Elvira was a housewife until the children left home and she went to work at the Agricultural Department at NMSU also known as Aggie snack bar until retirement. Elvira was an active member of St.
Genevieve's Parish church where she loved to volunteer for any church activities. She was an avid bowler since 1976 and a fan of bingo and her regular visits to the casino. She was also a huge fan of the Los Angeles Dodgers.

As the matriarch of a large family, she enjoyed the annual Trujillo family reunion in Chiz, New Mexico the original home stead of the Trujillo’s since the mid-1800's.

She is survived by her two sons Alfred and Jack Trujillo, by her grandchildren Latson (Alisha) and Jackie Munn, Paul (Kathy), Jacob, Theresa (Carl) Donald (Valerie) Trujillo, Jonathan (Liz) Birkholz and 12 great grandchildren, as well as a number of. Nephews and nieces from the Trujillo/Montano clans.

She was predeceased by her husband Gorgonio, her daughters Velma Sievert (Joe) and Anita Munn, and her nephew Duane Collette (Patsy).

Funeral services will be at 10:00 a.m. on May 5th at St. Genevieve's Catholic Church with a viewing at 5:00 p.m. and rosary on May 4th. Interment will follow the funeral mass at St. Joseph. Pallbearers will be Eddie Bourget, Silas Padilla, David Munn, Paul Trujillo, David Trujillo, Donald Trujillo, Ruben Esquibel, and Honorary pallbearer is Patricio Torres.

To send flowers to the family or plant a tree in memory of Elvira Trujillo, please visit our Heartfelt Sympathies Store.