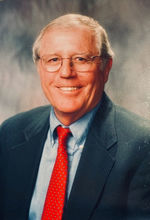 Harry (Pete) Sinclair Connelly Jr., a brilliant lawyer, mentor, scholar, self-taught chef and devoted husband departed this life at age 88 after an extended illness on Saturday, May 28, 2022. He was in his home in Las Cruces, NM with his wife, Minnette Connelly, by his side. Pete is survived by his wife, Minnette, two sons, Scott Connelly in Albuquerque, NM and Peter Connelly in Livingston, WY, one sister, Colleen Moss in Phoenix, AZ, one brother Denis Connelly in Marble Falls, TX, one grandson, Chase Connelly, and two granddaughters, Olaia and Neve. He is also survived by his extended family, Don and Dawn Marketto, grandsons, Dominic, Drew, and Devin Marketto and two great grandchildren, Max and Lucy who called him “Great Pete,” all living in Las Cruces, NM.
Pete was born in Houston, TX on April 25, 1934. His father was in the oil business and moved his family to Wichita, KS where Pete grew up. He went to high school at Missouri Military Academy in Mexico, MO where he graduated in 1952 as the Cadet Lieutenant Colonel of the school’s battalion. He graduated from the University of MO in 1956 and served his country from 1956 to 1958 on active duty with the United States Army Artillery as a Forward Observer. He was honorably discharged as a 1st Lieutenant on November 6, 1958 and served in the Military Reserves until 1962. Pete graduated from the Washburn School of Law in Topeka, KS in 1962 with honors in Constitutional Law. Thereafter, he received his Masters Degree from Georgetown University Law Center in Washington DC in 1963. While in DC, he worked for the Legal Aid Agency as a clerk for the Prettyman Scholarship Students at the Law Center. He moved to Santa Fe in 1963 and began his law career, joining a private firm where he soon became a partner of the firm, Stephenson, Campbell, Olmsted and Connelly. While living in Santa Fe, Pete was City Attorney for the City of Santa Fe, was a Special Assistant Attorney General and was in private practice specializing in land development. He was Santa Fe’s City Attorney for over five years. While in Santa Fe, Pete was engaged as City Attorney for the far reaching case of “City of Santa Fe v. Sangree de Christe Development Co. which went all the way to the Supreme Court of the United States and established that a city in NM was immune from suit unless a specific statute allowed suit. This case required the NM Legislature to enact the NM Tort Claims Act.
After moving to Las Cruces in 1992, Pete worked for twenty two years for the City of Las Cruces as Deputy City Attorney, Acting City Attorney, Interim City Attorney and City Attorney until he retired in 2016. In Las Cruces, Pete was the principal City Attorney engaged in the municipalization of the El Paso Electric Co and its settlement. He was also the City's chief negotiator in the City’s early negotiation with the creation of the new Municipal Labor law. In addition, he served in the City Attorney’s office through at least five City Managers. Between his employment as the City of Attorney of Santa Fe and the City Attorney of Las Cruces, Special Attorney General, and private practice, he had over fifteen reported cases in the NM Supreme Court, the NM Court of Appeals, the 10th US Circuit Court of Appeals, and the US District Court for NM. Pete was also a regular speaker at the NM Municipal Attorney Seminars and was President of that entity in 2011-2012. He had a passion for the constitution, justice, and fairness. His colleagues and friends could always depend on Pete for photographic recall of past cases, good counsel, respect, and loyal friendship.
While Pete’s primary passion was for the law, he also had other leisure interests. He was a gentleman who loved fashion and even opened a men’s clothing store called Harry’s Haberdashery in Santa Fe. It remained open until 2018. He was an enthusiastic cyclist and participated in the National Senior Olympics. All the while, he found time to be an avid reader and self-taught chef. Those close to him hoped to be invited over for dinner to enjoy a masterful culinary experience! He was even featured in the “New Mexican” in Santa Fe for his special recipes and cooking advice. Pete captivated those close to him with his light hearted sense of humor and charming manner. In his last years, Pete grew to know, love, and follow Jesus Christ. Pete is predeceased by his parents, four brothers, one sister, and his previous wife, Susan Connelly.
A celebration of Pete’s life will be held at Immaculate Heart of Mary Cathedral on Saturday, July 9, 2022 at 10am. There will be a reception following the service. Interment will take place in a private ceremony at the Santa Fe National Veteran’s Cemetery in Santa Fe, NM.
A reception immediately following the service will be held at The Boulders on the Green Clubhouse at 2323 Sedona Hills Parkway. Go to intersection of Sonoma Ranch Blvd and Sedona Hills Parkway, turn West, drive through the open gate, and the clubhouse is located on the right.
Charity:
Immaculate Heart of Mary
The Santa Terresa Fund
Community of Hope
(El Caldito Soup Kitchen 999W. Amador Ave.)

To send flowers to the family or plant a tree in memory of Harry Sinclair ""Pete"" Connelly Jr., please visit our Heartfelt Sympathies Store.