In Memory of
Robert Guy "Bob"
Talamini
1939 - 2022
Click above to light a memorial candle.
Memorial Candle Tribute From
Getz Funeral Home
"We are honored to provide this Book of Memories to the family."
View full message >>>
Send Flowers
Menu 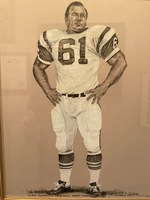 On May 30, 2022, the world lost a great great man! Robert Guy “Bob” Talamini was born on January 8, 1939, in Louisville, Kentucky. Bob graduated from Xavier High School and went on to attend the University of Kentucky, where he played football for the Wildcats and became known for his hard work and drive. Bob was drafted by the original Houston Oilers in 1960. During his pro football career he was selected to six straight AFL All Star games, two Pro Bowls, and the first team all AFL in 1967. Bob’s nine year football career culminated on January 12, 1969, when the AFL’s New York Jets stunned the NFL’s Baltimore Colts to win Super Bowl III..
Post-football, Bob began his career in the financial consulting business, where he helped thousands of people organize their finances for a better life. He was a Certified Financial Planner who was often recognized in the “Presidents Council” for his various financial planning successes. Other accomplishments include President of the Houston Touchdown Club, President of the NFL Alumni Association, and Board Member of the Las Curses symphony board. Bob was also active in his church community, where he served on multiple boards, giving back in any way he could.
Bob was for sure proud of all the above accomplishments, but he was most proud of his family. “Big Paw” was always interested, always watching, always caring. His phone calls were frequent and colorful. His big heart was made for loving Mary, his wife. Married for forty-one years, they enjoyed their life together in Las Cruses, NM, loving the community, the weather, and any restaurant they could get to!
Bob also had an amazing love for animals. His animals, his family’s animals, your animals……….basically any animal. Daggy his dog, Babe the blind dog, Bele the cat, and even one baby duck “Daffy” that thought Big Paw was his dad. Animals simply made big 250lb Bob smile like he had hit a hole in one!
Bob is survived by his wife Mary Will, sister Nancy Ratterman, children Robin, Bob Jr., Tina, Tony, John, Juliana, and Migne’, 14 grandchildren, 10 great- grandchildren and one on the way, and four Neices in Kentucky. He is also survived by his first wife and mother of 4 of his children, Charlene Talamini Legler.
Bob will be missed but we know he is watching and guiding from a great vantage point…… and we will all get a lot of peace from knowing that!
In lieu of the customary remembrances, the family requests donations in Bob’s memory to be directed to the Animal Rescue League of El Paso or to a charity of your choice.
The family will gather for a service at Saint Albert The Great Newman Center on June, 6, 2022 at 10:00am MST (11:00 for those in Houston). For those interested in attending virtually, the service will be streamed beginning at 10:00am MST (11:00 Houston time) at getzfuneralhome.com. Go to “streaming services” section of the main menu.

To send flowers to the family or plant a tree in memory of Robert Guy "Bob" Talamini, please visit our Heartfelt Sympathies Store.