In Memory of
Richard C "Ritchie"
Leyva
1932 - 2022
Click above to light a memorial candle.
Memorial Candle Tribute From
Getz Funeral Home
"We are honored to provide this Book of Memories to the family."
View full message >>>
Send Flowers
Menu 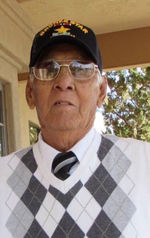 Richard C. Leyva was called home to the Lord on the Feast Day of the Sacred Heart of Mary, June 25, 2022.

Born to Crisoforo and Francisca in 1932, Ritchie was born and raised on Hayner’s Ranch, and called the Chile Capital of the World, Hatch, N.M., home. He recently celebrated his 90th birthday in February of this year.

Ritchie was incredibly proud of his military service to his country, serving overseas during the Korean War from July 1952 to April 1954, after the ceasefire. During his time in the U.S. Army, he received several medals including two Bronze service stars.

On Christmas Day in 1956, Ritchie married the love of his life, Ruby Serna Leyva. Together, they raised four wonderful children, building a large and happy family in their 65 years of marriage.

He retired from the U.S. Boundary Commission, also previously working with the U.S. Bureau of Reclamation as a ditch rider.

Throughout his life, he loved to spend time outdoors — hunting in Lake Valley, and fishing at Percha Dam, Caballo Lake and all the drainage ditches in the area. Many family and friends have crazy memories of Ritchie taking them on hunting or fishing trips in Southern New Mexico.

He also enjoyed watching all sporting events, even remembering plays from years or decades prior. When not watching the Dallas Cowboys, you could typically see him enjoying music on his record player or watching an old Western movie.

One of his greatest prides were his grandchildren, bragging about every one of them to anyone who would listen.

Richard is preceded in death by his daughter Naomi Mansur; great-grandson, Alias Mansur; his parents, Crisoforo and Francisca; and his siblings, Chris Jr., Ofelia, Kika and Johnny.

Ritchie is also survived by his 14 great-grandchildren, and countless nieces, nephews, family and friends who all loved him dearly.

A Rosary and Funeral Mass will be held at Our Lord of Mercy Catholic Church in Hatch, N.M. on
Wednesday, July 6, 2022 at 10 a.m. A burial will follow the celebration of life at the Garden of Memories Cemetery in Hatch. Pallbearers will be Ritchie’s grandsons. Honorary Pallbearers will be Ruperto Legarreta, Sabino Ramirez, Frank Vasquez, Ronnie Bernal, Henry Trujillo, Lalo Legarreta and Capt John G. Aicher.

To send flowers to the family or plant a tree in memory of Richard C "Ritchie" Leyva, please visit our Heartfelt Sympathies Store.