In Memory of
Mary Kathryn "Kay"
Hall (James)
1942 - 2022
Click above to light a memorial candle.
Memorial Candle Tribute From
Getz Funeral Home
"We are honored to provide this Book of Memories to the family."
View full message >>>
Send Flowers
Menu 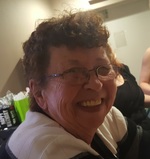 Mary Kathryn "Kay" Hall, aged 79, passed away in the comfort of her home in Las Cruces, NM on June 30th 2022. Kay was born November 24th 1942 in Ewing Nebraska to Duane Joseph "Bud" and Dorothy Charlotte "Dot" James.
Kay's early life was typical of being raised in the fifties in San Diego, CA, where she dedicated herself to raising her 5 children and maintaining a loving home. When she had almost completed that task she decided to further her education and started Nursing school where she earned her degree in Nursing in 1979 and worked as a Registered Nurse at Memorial Medical Center until her retirement in 2006.
Kay loved her family and thoroughly enjoyed spending time with them. A woman of few words and one never to complain about anything, she made life fun. She will be greatly missed by everyone that knew her.
She is survived by her youngest Daughter and caretaker Denise Schulz, of the home, Daughters, Deana Smith and Debbie Peters (Buster) of Pueblo, CO, Sons, Donnie Hall (Mary) of Pueblo, CO and Son Danny Hall of Lamar, CO. She is also survived by 18 Grandchildren and 30 Great Grandchildren, her Father DJ "Bud" James(Joyce) of Deming, NM, her two Brothers Jim James (Josie), Joe James (Charlene) both of Las Cruces, NM, along with numerous Nieces and Nephews.
Kay was preceded in death by her Mother Dorothy Charlotte "Dot" James, Son-in-law Kenny Smith, Granddaughter-in-law Nicole Farrell and Great-Grandson Roman Castaneda.
Her family would like to invite everyone to come join them for a Celebration of Life at the Fraternal Order of Eagles, 980 N. 17th, on July 16th, 2:00pm, Where she was lovingly known as "Mama Kay".

To send flowers to the family or plant a tree in memory of Mary Kathryn "Kay" Hall (James), please visit our Heartfelt Sympathies Store.