In Memory of
Ramiro Romero
Saenz
1955 - 2022
Click above to light a memorial candle.
Memorial Candle Tribute From
Getz Funeral Home
"We are honored to provide this Book of Memories to the family."
View full message >>>
Send Flowers
Menu 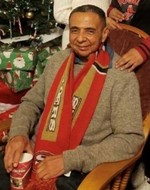 Ramiro R. Saenz passed away peacefully in his home in Houston, Tx. Our beloved son, father, husband, and Grandpa was born August 2, 1955, in Anthony, NM to Lorenzo and Corina Saenz.
He joined the Army in 1979 became an Army Medic and retired in August of 1995.
Those left to mourn him include his mother Corina Saenz, his wife Alma Gomez and his children; Jessica Ellis (Thomas), Rammie (Raymond), Rebecca (David), Aundrea, Erick, Ramiro Jr, Patrick (Desirae), Denise, and Selena. He also left his sisters and brothers Irene (George), MaryAnn, Patty (Gilbert), Bertha. Danny (Concha), Rodolfo, Frankie (Becky), and Samuel. His grandchildren Unique, Eli, Aubrey, Raymond Jr, Leo, Memory, Anthony, Annebel, Alitzel, Anthony, Isaiah, and Brianna. As well as numerous nieces and nephews, great nephews and nieces.
Ramiro Saenz is preceded in death by his wife Jessie P. Saenz, father Lorenzo Saenz, and his sister Bertha Saenz.
Funeral services will be held at Immaculate Heart of Mary Church on Friday September 9th, 2022, beginning at 10:00 am. Burial will follow at Fort Bliss National Cemetery in El Paso, Tx at 2:30 pm the same day.

To send flowers to the family or plant a tree in memory of Ramiro Romero Saenz, please visit our Heartfelt Sympathies Store.