In Memory of
Richard
Asbury
1948 - 2022
Click above to light a memorial candle.
Memorial Candle Tribute From
Getz Funeral Home
"We are honored to provide this Book of Memories to the family."
View full message >>>
Send Flowers
Menu 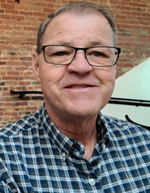 Richard Kirk Asbury passed away peacefully at home with his family by his side on Friday, August 26, 2022.
Richard was born March 3, 1948, in Los Alamos, NM to Russell Asbury and Marjorie Asbury. Richard graduated from NMSU where he met his loving, charismatic wife. They were married for nearly 53 years until her passing in 2020.
Richard is preceded in death by his wife Lynna Gaye Asbury, his parents Marjorie E. and Russell P. Asbury, and his brother David Asbury. He is survived by his son, Richard L. Asbury and wife Jillian Ross, grandson Ashton K. Asbury, his brother Russell K. Asbury and wife Joni Asbury.
Richard retired from the New Mexico Environment Department and continued working as a contractor for NMED for some time after. He was an avid outdoorsman. Camping, fishing, RVing, and traveling were his favorite hobbies. He and his wife traveled much of the United States often spending months at a time in their favorite destinations. Richard, too, spent a great deal of his time researching and building his family tree on Ancestry and sharing his discoveries with his brother, Russell, and their descendants.
A loving son, brother, husband, father, grandfather, friend, and philanthropist are titles he was proud to carry. He was filled with great love, was humble, never complained, and he did his best to make the world better. His kindness, gentleness, generosity, and quick-witted puns were some of his many wonderful attributes. He will be missed greatly, but he will never be forgotten. As he crossed over, the love of his life was waiting with outstretched hands to once again be as one.
In lieu of flowers, the family asks that donations be made to the Mesilla Valley Hospice in Richard’s Memory.

To send flowers to the family or plant a tree in memory of Richard Asbury, please visit our Heartfelt Sympathies Store.