In Memory of
Ernest Arthur
Banegas Sr.
1961 - 2022
Click above to light a memorial candle. 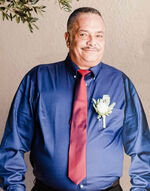 Our beloved father, grandfather, brother, uncle, son, and friend, Ernest Arthur Banegas, Sr was called home on September 3, 2022, and entered eternal life at the age of 61. Ernest was born February 6, 1961, to Ernest Alvarez Banegas, and Bertha Ortega in Las Cruces, NM. After dad graduated from Las Cruces High School in 1979, he went on to join the Marine Corps where he proudly served his country and was honorably discharged in 1983.
In 1980, he would then meet his former spouse Irma Leos at PDQ convenience store of Anthony, TX. They would marry on July 17th, 1982, at St. Anthony’s Catholic Church in Anthony, NM. Ernest and Irma went on to have 3 children; Ernest Arthur, Jr “E.J”, Lynette Marie “Lyni” and Veronica Denise “Vero” Banegas.
Aside from his greatest passion in life of being a proud father & husband, he became a professional truck driver, where he would spend 13 years devoted to driving his beloved Peterbilt. Pops then retired from the road. He had many hobbies. A true jack of all trades, and a master of none. Sundays were for cheering on his favorite NFL team, The Dallas Cowboys. He enjoyed playing dominoes, throwing darts, working on his truck, spending time with his family that he kept near his heart, and most importantly keeping up with his faith and praying his rosary. Dad was devoted to the Catholic Religion and had the utmost faith, and would serve San Luis Rey Catholic Church of Chamberino, where he worked tirelessly with the youth group and taught catechism.
Daddy was preceded in death by his father Ernest Alvarez Banegas, grandfather George Banegas, grandmother’s Angelita Banegas & Petra Morales. He is survived by his mother, Bertha Banegas. His brothers, Phil (Debbie), Tim (Patsy), Ron (Diane), Vincent (Leigh) His children, Ej (Cristal), Lynette (Fred), Veronica (Wayne) His grandchildren, Gavin, Bryan, Noah, Mia, JR, Luna, Kaya, Wayne III, Zoe, and baby Ava who is due in February, and his former spouse Irma Banegas. Our dad had numerous nieces and nephews, 6 great nieces & nephews, many in-laws and cousins.
Everyone who knew Pops, felt the love and giving nature. Dad was filled with compassion, and made sure he could help whoever he could, even if it left him without. His smile and laugh were contagious making it one that could never be forgotten. Daddy, you are missed tremendously, and hope you know just how much you are loved.
The procession will start at Getz Funeral Home 1410 E. Bowman Ave, Las Cruces, NM 88001 at 9:30 am on September 15th, 2022, where we will take dad home to St. Albert the Great Newman Parish 2615 S. Solano Dr, Las Cruces, NM 88001. The public viewing will begin at 10:00 am at Newman center, with the rosary and mass to follow.

To send flowers to the family or plant a tree in memory of Ernest Arthur Banegas Sr., please visit our Heartfelt Sympathies Store.