In Memory of
James Francis
Cotter
1957 - 2022
Click above to light a memorial candle.
Memorial Candle Tribute From
Getz Funeral Home
"We are honored to provide this Book of Memories to the family."
View full message >>>
Send Flowers
Menu 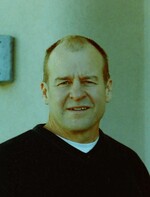 The family of James Francis Cotter sadly announces his passing on September 8, 2022 of a progressive neurological circumstance. James was born on October 14, 1957 in Lexington Kentucky to Donald and Frances (Hanff) Cotter. His mother preceded him in death. He is survived by his caring and beloved wife, Debora Joyce (Mitchell) Cotter, children; Christopher Cotter, Ph.D. (Elizabeth Hale Cotter), grandsons Henry Cotter and Andrew Cotter, Allison Hatley-Cotter, Ph.D. (Ben Hatley) and Jessica Cotter, brother Lee Cotter (Las Cruces) and sister, Susan Cotter (Portland, OR). James and Debora were married in Las Cruces on December 27,1981.
James’ young education largely occurred in Las Cruces, NM, having graduated from Las Cruces High School, and New Mexico State University (NMSU) where he earned a BS in Civil Engineering in 1980. He engaged in residential construction activities under his company, Crest Home Builders. Following graduation, he worked as an engineer for Continental Pipeline. Subsequently, he earned an MBA from University of Indiana in 1984 where he served as class president. Following graduation, he worked for Continental Bank with lending responsibilities in locations including Oklahoma City, Chicago and Los Angeles. In his search of a legacy in academia, he began his study of Finance at the University of North Carolina (UNC) which culminated in his earning a Ph.D. in 1993.
Prior to falling victim to his neurological issues leading to an untimely disability and retirement, he studied and served at four universities (UNC, University of Iowa, NMSU, and most recently, Wake Forest University). James was one of those rare professors who brought to his discipline, finance a legacy of creating and managing a business, experience as a working engineer and years in banking where he dealt with issues related to matters of money and finance. These hands-on experiences created a exceptional vision which lighted a unique path as he traveled on his journey in academia. James achieved excellence in teaching and research. He has been awarded and rewarded for distinction in teaching during his professional career at the four universities where he studied and served. During his tenure at NMSU (1997-2001), James began a banking study program for students and in support of the state banking industry. As a professor at his Wake Forest University (WFU), he was acknowledged to be in the top ten percent of researchers in his discipline as determined by an analysis of his peer reviewed publication record.
Evidence of his love for students, and his excellence in teaching comes from an impressive list of twelve awards, chairs and fellowships during his nearly thirty-year academic career. He was senior author of an original book on teaching that he and his father authored entitled: Finding the Great Teacher Inside You, published in 2010. His most recent academic honor: the “Horrace Kelly Alumni Teaching Award” was awarded at WFU in 2014. He earned this tribute when a majority of nearly two-hundred alumni working at their craft for ten years, identified James as their most influential professor during their tenure as students in the College of Business at Wake Forest University.
All who knew James as a spouse, father, grandfather, colleague, and friend, are indeed proud of his legacy during his abbreviated life, and we are especially saddened by his passing. Those wishing to acknowledge their feelings about James in a personal way may do so at: GetzFuneralHome@GetzCares.com.
A Memorial Service will be held at 10:00am on Saturday, September 24, 2022 at Getz Funeral Home Chapel.

To send flowers to the family or plant a tree in memory of James Francis Cotter, please visit our Heartfelt Sympathies Store.