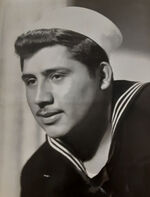 Our beloved Husband, father, grandfather, brother, uncle, son, and friend Felipe Cortez passed away on September 11, 2022. Felipe was Born on August 23, 1932. He was a lifelong resident of Anthony, NM.
Felipe attended the Gadsden school district, He served his country honorably from 1952-1960 in the National Guard, United States Navy-USS Shasta (during the Korean War) and the Reserves. After 28 years of service, he retired from WSMR PX. After retirement he worked at the Anthony Elementary School as a cross guard. He served as a bartender at the VFW Post assisting with any odd jobs needed done. He was always willing to lend a helping hand and enjoyed the many conversations had when bartending. He was a member of St. Anthony’s Catholic Church and the VFW Post #4384. He enjoyed the great outdoors taking his family camping and visiting National Parks and areas of interest around NM, deer hunting with his sons and watching western movies, baseball and football with family and friends.
Felipe is survived by his loving wife Josefa B. (Pepa) Cortez his children Arturo B. Cortez, Luis Cortez, Ricardo Cortez (Lissete M.), Jimmy Cortez, Eva Cortez (Joe F. Felix) His sibling Eustolia Ortega (+Manuel), Isabel Barajas (+Raymundo) Daniel Cortez (Socorro), Alfredo Cortez plus Numerous grandchildren and great-grandchildren.
Felipe is preceded in death by Daughter: Maria Elena (Nena) Cortez, Grandchildren: Angela Cortez and Felix Cortez, Parents: Juan and Elena Cortez, Brother: Lorenzo Cortez and Sister Mollie Balderama
Services with military honors for Felipe will be held on Thursday, September 22, 2022 at St. Anthony's Catholic Church beginning with a viewing at 10:00am, Rosary at 10:30, Funeral Mass at 11:00 am followed by Burial at Ft. Bliss National Cemetery at 1:00 pm.
Pallbearers: Tury Cortez, Ruly Cortez, Ricardo M. Cortez, Jr. Cortez (Santiago), Alfred Lujan and Arturo Lujan, Honorary Pallbearers: Corina Cortez and Ruben Medina
Heartfelt thanks to his Granddaughters Corina and Yvonne who cared for him and provided love and
comfort to their grandpa during his time of need, we are eternally grateful.

To send flowers to the family or plant a tree in memory of Felipe Cortez, please visit our Heartfelt Sympathies Store.