In Memory of
Eulalio
Rodriguez
1926 - 2022
Click above to light a memorial candle.
Memorial Candle Tribute From
Getz Funeral Home
"We are honored to provide this Book of Memories to the family."
View full message >>>
Send Flowers
Menu 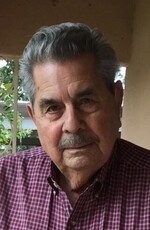 Eulalio “Lalo” Rodriguez was called to Heaven on September 17, 2022, he passed peacefully in his home, surrounded by his loving family and his beloved wife of almost 75 years.
Lalo was born on February 12, 1926, in Rincon, New Mexico, the youngest child of Bernadino Rodriguez and Lucia Guerra-Rodriguez.
Lalo grew up on the family ranch in Radium Springs New Mexico, learning the value of hard work instilled by the many responsibilities he and his siblings were given since a very young age. He was several years younger than his closest sibling (10 years), often referred to as “The Baby” by his brothers and sisters. He maintained that work ethic his entire life, always looking for the next project and willing to help anyone needing assistance.
As he grew older, trips to Las Cruces became more frequent allowing him to meet the love of his life Adela Carrillo. They fell in love and got married, their bond lasted almost 75 years. They had four children, Henry Rodriguez (Espy), Irene Rodriguez, Eddie Rodriguez (Jane), Nancy Rodriguez-Cano (Joel).
Lalo had 14 grandchildren whom he loved and cared for very much. His granddaughters include Christine Dominguez, Leticia Rodriguez, Kelly Rodriguez, April Cano-Medina, Theresa Rodriguez, Covina Rodriguez, Valerie DelaO, Annette Nanez. His grandsons include Henry Rodriguez, Tommy Rodriguez, Jeremy Cano, Nicolas Rodriguez, Eddie (Lio) Rodriguez, and Adam Rodriguez. He had 40 Great Grandchildren, and 10 Great-Great Grandchildren.
Lalo worked for several companies as a young husband and father. He eventually was employed by the New Mexico State Highway department as a heavy equipment operator working and retiring after over 30 years of service. He was master operator of all heavy equipment owned by department. He shared many fond memories of traveling with the highway department throughout the state with his family. Eventually being stationed in Las Cruces where he completed his career.
To know Lalo was to love him, we will all fondly remember the unique nicknames he lovingly called his grandchildren. Lalo was a very caring and generous man always willing to help anyone down on their luck, whether he knew them or not. If someone were sick or in the hospital, Lalo could be counted on to be first to visit. His big heart was always on display, never having a cross word to say about anyone. His word was his bond, always following through on his handshake promise. Lalo loved adventure, the outdoors and the challenge of looking for hard to find items his family was looking for as well as any flashlight or watch he came across. We will always have fond memories of him working in the yard and riding his lawnmower which, he enjoyed.
Lalo was the last surviving sibling of his family, he was preceded in death by his father Bernadino Rodriquez, mother Lucia Guerra-Rodriguez, and siblings Kika Benavidez, Bonnie Urista, Juanita Lucero, Josefina Lucero, Maria Jaramillo, Isabel Rodriguez, Fermin Rodriguez, and Lencho Rodriguez. He was also preceded in death by three grandchildren, Mary Rodriguez, Steven Rodriguez, and Veronica Rodriguez.

To send flowers to the family or plant a tree in memory of Eulalio Rodriguez, please visit our Heartfelt Sympathies Store.