In Memory of
Oliver B
Smith
1928 - 2022
Click above to light a memorial candle.
Memorial Candle Tribute From
Getz Funeral Home
"We are honored to provide this Book of Memories to the family."
View full message >>>
Send Flowers
Menu

Obituary for Oliver B Smith 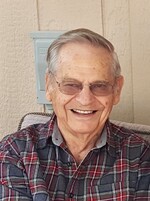 Oliver B Smith, 93, of Las Cruces NM passed away on September 24, 2022 at Mountainview Medical Center with his wife, daughters and son-in-law at his side.

Oliver was born in Bath, Kentucky to William and Myrta Smith. He was the 9th of 11 children. He proudly served in the United States Army for 22 years. He had been stationed at Camp Breckenridge, Kentucky, Ft. Lee, Virginia, Germany, Japan (twice) and finally at Ft. Bliss, Texas. For his service, Oliver earned the Republic of Vietnam campaign medal, the Vietnam Service medal, the Bronze Star, the Army Commendation medal, the Meritorious Unit Commendation and the Army Commendation medal. He retired as a Chief Warrant Officer 2.

On September 27, 1952 he married the love of his life, Rita Tessmer, and their marriage spanned 70 years until his death. Together they had four children, Dr. Michael B. Smith (Robyn) of Houston, Texas, Karen O'Brien (Tom) of Las Cruces, New Mexico, Benita Billingsley (Scott) of Albuquerque, New Mexico, and David B. Smith (Mai) of New Ulm, Texas.

After retiring from the Army, Oliver worked at Mack Massey in El Paso for 17 years as the Parts Manager. He then moved to Storey Cadillac. After retiring for the third time Oliver and Rita moved to Cloudcroft, New Mexico. They purchased a motor home and began to enjoy traveling. They moved to Kerrville, Texas for a few years before ending up in Las Cruces. Oliver always enjoyed woodworking and made many wonderful items for his family.

Oliver is survived by his wife and children, sisters Mildred Brown and Helen Taylor, two grandchildren, and four great-grandchildren.

To send flowers to the family or plant a tree in memory of Oliver B Smith, please visit our Heartfelt Sympathies Store.