In Memory of
Billie L
Beaty
1941 - 2022
Click above to light a memorial candle.
Memorial Candle Tribute From
Getz Funeral Home
"We are honored to provide this Book of Memories to the family."
View full message >>>
Send Flowers
Menu 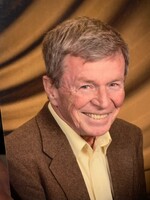 Bill was born on May 31, 1941, in Marshall, TX to Ira and Bertha Beaty. His father was in the Army Air Corp, which moved the family around the world through most of his childhood, eventually settling in Enid, OK. He graduated from Enid High School in 1959. Bill joined the Air Force in 1962 and married his wife, Jackie, in 1968. They had two children together and moved often.

Bill served 20 years in the Air Force as an enlisted electronics technician and electrical engineer after earning his commission. He obtained his undergrad from NMSU, and his master's from Florida Tech. Following his retirement in 1982, he settled his family in Las Cruces, NM, and went on to have a second career with Westinghouse/Northrup Grumman, retiring a second time in 2002.

In his younger years Bill enjoyed biking, rappelling, spelunking, and fishing. Throughout his life he was an avid reader and had a great love and appreciation for music. He loved Sudoku, having coffee with his friends, fiddling with computers, and talking with anyone from other parts of the world. Bill picked up languages very easily and loved to experience other cultures. In any language, be bad a dry sense of humor and a love of puns for which he will be remembered.

Bill is survived by his wife Jackie, his son Scott Beaty, daughter and son-in-law Lindy and Kent Gregg, and his grandchildren, Jay Henry, Trevor, Masyn, and Eme. He is also survived by his brother and sister-in-law. Butch and Suzanne Beaty, in-laws Joe and Sharon Schrodt, many nieces and nephews, and sweet bonus family members that were discovered in recent years, Scott Greenhalgh and Dian Callaway.

To send flowers to the family or plant a tree in memory of Billie L Beaty, please visit our Heartfelt Sympathies Store.