In Memory of
Bonnie Lynne
Fuqua
1956 - 2022
Click above to light a memorial candle.
Memorial Candle Tribute From
Getz Funeral Home
"We are honored to provide this Book of Memories to the family."
View full message >>>
Send Flowers
Menu 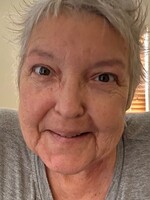 Bonnie Lynne Del Aguila Fuqua of Las Cruces, NM, passed away within the intimacy of her family on 28 October 2022 after an extended battle with cancer.

Bonnie was born in Pensacola, Florida, on 25 May 1956 to parents Edward and Dixie Del Aguila. After graduating Pensacola’s Escambia High School in 1974, she majored in Home Economics at the University of West Florida and later earned a Master’s in Administration from Central Michigan University, the broad combination of disciplines and experience providing a solid foundation for her eventual federal civil service career in national security. She spent her final year of service as a security specialist for the NATO branch in Huntsville, Alabama.

Sharing no classes or activities with her future husband, she met Christopher Fuqua in 1971 at the age of 15 when he approached her after school, saying, “You don’t know me, but I really want to know you. I’m Chris,” to which she replied, “Oh, I know who you are.” The couple married in 1978 and celebrated their forty-fourth anniversary in September 2022. After eleven years of marriage and fully established in their careers, the couple decided to have children in 1989. Following two miscarriages, Bonnie decided to try once more which proved the charm, resulting in the birth of their daughter, Tegan Rebeccah, in 1991.

Relentlessly adhering to the highest ethical and professional standards that earned her repeated professional recognition and respect, she served in such locations as Florida, Alabama, and Hawaii, with temporary assignments around the country and briefly in Brussels, Belgium, for NATO before retiring to New Mexico.

After retirement, the couple planned to revisit Japan and travel to Europe, Australia, and New Zealand, but cancer and the COVID pandemic forced them to remain closer to home, so they used the time to explore New Mexico’s beauty. The couple made the very best of the pandemic, spending perhaps their most intimate years together during that time.

Bonnie refused to allow anything to beat her down, to tarnish the joy of life and time with her family and friends, always choosing optimism over pessimism, hope over futility. The family’s rock and steady hand, Bonnie was predeceased by her father Edward Benjamin Del Aguila and brother Douglas Edward Del Aguila. She is survived by her husband Christopher, daughter Tegan Rebeccah (Ashley Rizo) of Las Cruces, sister Linda Carol (Jack Waldroup III) of Mississippi, Mother Dixie Del Aguila of Alabama, niece Amy Waldroup-Baskin (Neal Baskin), nephews Jesse and Cody Waldroup, great-niece Dixielynn Waldroup, and great-nephews Jack and Edward Baskin, all of Mississippi.

“Everyone has to die,” Bonnie said days before passing. “I’m just going earlier than a lot of others. I’m not happy about it, but it’s reality, and I’m going to celebrate every moment of joy I have until then.”

The family requests donations in memory of Bonnie be made to cancer research organizations, World Central Kitchen, Action Programs for Animals in Las Cruces, and secular, non-partisan food banks.

To send flowers to the family or plant a tree in memory of Bonnie Lynne Fuqua, please visit our Heartfelt Sympathies Store.