In Memory of
Richard Vernon
Lunsford
1948 - 2022
Click above to light a memorial candle.
Memorial Candle Tribute From
Getz Funeral Home
"We are honored to provide this Book of Memories to the family."
View full message >>>
Send Flowers
Menu 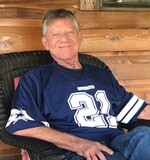 Dick married Toni S. Hapes in 1969, and together they had two beautiful daughters, Allyson D. Lunsford and Traci E. Lunsford.
After graduation from college, Dick began his professional career as a Petroleum Engineer with Texaco Inc. in Vernon, Texas, and after a few years he chose to work for a smaller independent oil and gas company, Mitchell Energy Corporation, at its offices near Dallas, Texas. Dick and Toni raised their children in Azle, Texas while he worked for Mitchell and its corporate successor, Devon Energy Production Company, until his retirement in 2012. He had a long and fulfilling career and served with distinction in his role as a Petroleum Engineer, helping to bring energy security to the United States. After retirement, Dick moved back to Las Cruces.

Dick married Judi Ewing Monet, his high school sweetheart, on May 22, 2013, and remained married to her until his death. Judi had two sons, Todd and Michael, and one daughter, Jackie, from a prior marriage, and all of them were dear to Dick. Dick always treated Judi’s children as his own, and he considered his children and her children as one large family. Dick is survived by his daughters, Ally Conley (Mike) and Traci Theis (Reagan), and Judi’s daughter, Jackie Schofield (Scott), and four grandchildren. He is also survived by his brothers, Wayne O. Lunsford (Linda), Douglas L. Lunsford (Wendy) and Stephen L. Lunsford (Mary), younger sister, Cindy Porter (John), step-brother, Terry Nichols, and step-sisters, Donna Blackman and Theressa Demers, and numerous cousins, nieces and nephews and their
children, and his many, many friends, especially Mike Gresham. Dick was predeceased by his parents, his older sister, Fay Hill, his step-brother, Mike Nichols, and his stepson, Todd Monet.

Dick and Judi were faithful members of the St. Paul’s United Methodist Church of Las Cruces, New Mexico, and he was a faithful servant of the Lord until his death.

The family requests that in lieu of flowers, memorial contributions be made to the Alzheimer’s Association or to St. Paul’s United Methodist Church.

Arrangements have been entrusted to Getz Funeral Home.

To send flowers to the family or plant a tree in memory of Richard Vernon Lunsford, please visit our Heartfelt Sympathies Store.