In Memory of
Jaime Barajas
Guerrero
1952 - 2022
Click above to light a memorial candle. 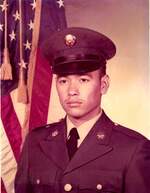 Jaime B. Guerrero, 70, of Mesilla Park entered eternal life on Saturday, November 26, 2022 surrounded by his family. He was born on November 19, 1952 in Cd. Lerdo Durango, Mexico to Anselmo and Consuelo Guerrero. He later became a U.S. citizen and graduated from Gadsden High School. After graduating high school, he proudly served his country in the U.S Army. He enjoyed his time in the military and fondly spoke of his many memories of that time. He later worked and retired from White Sands Missile Range. His mischievous smile and joking nature will be missed.

He was preceded in death by his paternal grandparents Refugio and Clara Guerrero, parents Anselmo and Consuelo Guerrero and his brothers Refugio “Cuco” and Anselmo “Shorty” Guerrero.

A Visitation is scheduled for Wednesday, December 14, 2022 from 5 to 7 pm, in the Getz Funeral Home Chapel, located at 1410 E Bowman Ave Las Cruces, New Mexico. Recitation of the Holy Rosary will be at 7 pm. The Funeral Liturgy will be celebrated on Thursday, December 15, 2022 at 10:00 am at the San Miguel Catholic Church, located at 19217 Hwy 28, San Miguel, New Mexico. Presentation of the flag and military honors will follow.

To send flowers to the family or plant a tree in memory of Jaime Barajas Guerrero, please visit our Heartfelt Sympathies Store.