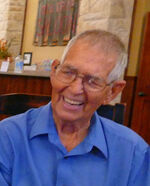 Billy Jack Spray (Jack Spray) was born on December 21, 1935 to Agle Lee and Rosa Spray of Matador on a cold morning near Whiteflat, Texas. He passed from this life on January 3, 2023. His mother named his distinguishing characteristics as determined and independent; perhaps he was born just that way, for he's been thus ever since, accomplishing whatever he set out to do. Or perhaps "steadfast" would better describe his lifelong, never wavering commitment to God, family and friends. Always constant, always devoted and faithful, cherished by those he touched, he lived an inspiring life to be admired.
He attended West Texas State College and graduated in 1958 with a degree in math. He served in the army in Pennsylvania at a Nike missile site. He returned to Texas to teach math and physics in Spur for 2 years. In 1962 he was hired as a computer programmer at WSMR where he worked until he retired in 1990. He was a member at University Church of Christ, where he served as an elder for 33 years.
He married his college sweetheart Sylvia Sheldon in December of 1956. He is survived by his wife, 4 children, Scott and wife Lisa of Norman, OK, Nikki Whitlock of Garland, TX, Becky Keyes and husband Kevin of Las Cruces, Jay and wife Kelli of Ruidoso. His surviving descendants include 12 grandchildren, Sally Becker, Gwyn Nance, Alice Whaley, Alexander Spray, Kaitlyn Thames, Brandon Whitlock, Shane Coppedge, Will Coppedge, Lynn Jemison, Caleb, Nathan, and Andrew Spray and their families, including 14 great-grandchildren. He is also survived by sister Geney Stan of La Plata, NM and his nieces and nephews. He was preceded in death by his parents, brothers Norman and Melvin, sister Melba and grandson Justin Coppedge.
He dedicated his life to serving God wherever he lived. At his request there will be no services.

To send flowers to the family or plant a tree in memory of Jack Spray, please visit our Heartfelt Sympathies Store.